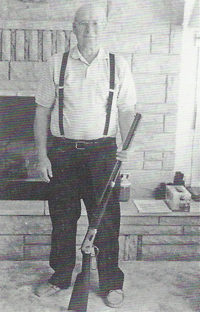 (Picture to the left: Vernon (Mick) Lee)
Grandpa Lee, the first white man to live in Curtis, arrived about 1884. He lived with the Chippewa Indians in the hut of Chief Saw-Naw-Quato for 18 months. He was treated like family and they stayed friends after he moved out. The huts were on the site of the present day Curtis Park at the NW intersection of H42 and Saw-Naw-Quato Street.

In 1886 the government granted land patents to several Chippewa and one white man, my grandfather, John Lee. His property was directly south of the Park and the hut of the chief. The property included the high bluff and extended to the shores of South Manistique Lake. In recent years the sand has been removed and the cabins and several houses are now on the shore of the lake. His house and barn were exactly on the spot of the public parking lot.

My grandparents were the first white man to build a log house and a log barn. It was in their house in 1888 that the first white person was born in Portage Township. My Aunt Rhoda. My dad, Neil, was born there in 1890. The first voter registration and the first election was held in this house.

I remember going to Grandpa' s farm with Pa and my brothers. We played on a wooden gate held together with wooden pegs. To allow the gate to swing easily a pole was attached to a spring and a pail of stones was attached to the pole.

One of Grandpa' s fall chores was to cut dry cedar into fine sticks. During winter nights the family sat around the wood stove as many families sit around the television today. Grandpa would light one of the cedar sticks and hold it in his hand for their light source.

Pa said he and Grandpa fished every day from a canoe they kept on the shore at the bottom of the bluff. They fished along the north shore and caught all the fish for the day' s meals in a very short time. They ate boiled fish every day. People did not fry fish as we do today.

Grandpa was a farmer and a drayman. A drayman is a trader. In those days people who had no money bartered. He'd leave home in the morning with his horse and buggy and perhaps a chicken, milk, eggs or potatoes. He would go from house to house trading. Pa said he' d leave in the morning with a few things from the farm and come home with a wagon full of items.

One winter Grandpa and a teamster (a man who drove a team of horses) hauled supplies for a lumber company with a horse and sleigh. The supplies were carried in a wooden box four feet high, eight feet wide and sixteen feet long. The box had several trap doors on the top. To keep the wolves away, lighted lanterns were hooked onto the sleigh and chains were dragged behind because they made noise; which didn't always work. One night they were hauling freshly butchered meat from Newberry to Camp A. A pack of snarling wolves tried to attack them. They threw out several pieces of meat for the wolves to eat so they could continue on safely. Pa said Grandpa was really scared.

I don" t remember Mary Lee, Grandma. She died in 1895 when Pa was five years old. Pa never talked much about her. What I do remember is that the family members said she was a small, strong woman. Before a well was dug she carried two buckets of water at a time from the lake back up the bluff to their farm. The buckets hung from a carved wooden yoke she carried on her shoulders.

After Grandma' s death Grandpa married a widow, Margaret Anderson. Between them I believe there were twenty-one children. Pa said he often stayed with David Hearn, a teacher who lived on the SW corner of the intersection of H33 and Sandtown Road. The original house is still there. Whenever we visited Curtis, Pa always stopped there and let us drink from a flowing well that was in Dave' s front yard.

Unfortunately, we don't know a lot about those days. Pa just didn't talk about it much.


Copyright ©2016 - 2022 Manistique Lakes Area Tourism Bureau. All images, logos, web pages may not be duplicated or used in any way without the written consent of the MLATB. All rights reserved.